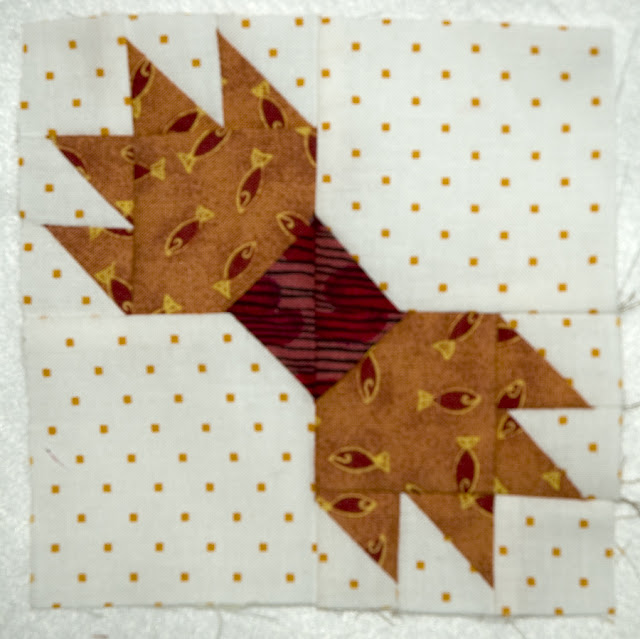 We all know that quilting is a danger sport where we brandish rotary cutter blades and needles and use metal armor as protection. Today, we're going to take it up a notch and make a bow-tie for a bear. Yes, that's a bow-tie with bear claws on either end.

First, let's talk fabric. Obviously, I went with orange because that is the color of the month at the Rainbow Scrappy Challenge, hosted by Angela at SoScrappy along with Tiny Tuesdays. But you also want to choose a fabric that a bear would like...a food theme is a safe bet. Bears are known to tolerate plaids, but only in the Northwest.

As with all Tiny Tuesday blocks, we will end up with a 5 inch unfinished block (4.5 inches square finished).

You will want three fabrics: a background, a claw fabric, and a jaunty knot fabric that we are going to refer to as dark.

Cut two 2 inch squares of the claw fabric, plus enough for eight half-square triangles. (I told you this was a dangerous block!) 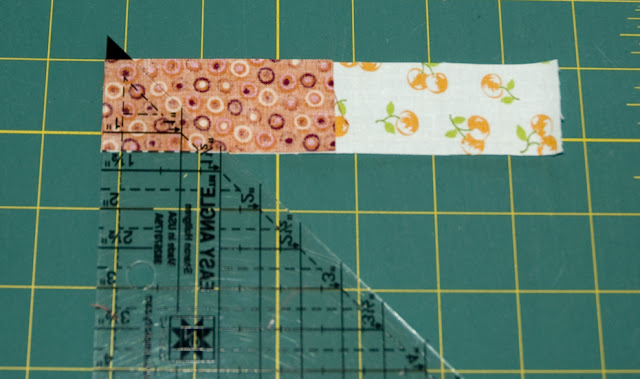 The half-square triangles finish at .75 inches. Make them however you would like.

I made mine from 1.25 inch strips of the claw fabric and the background fabric, and used the Easy Angle triangle to cut eight sets of triangles. (Bonnie Hunter has a video demonstrating this method.) 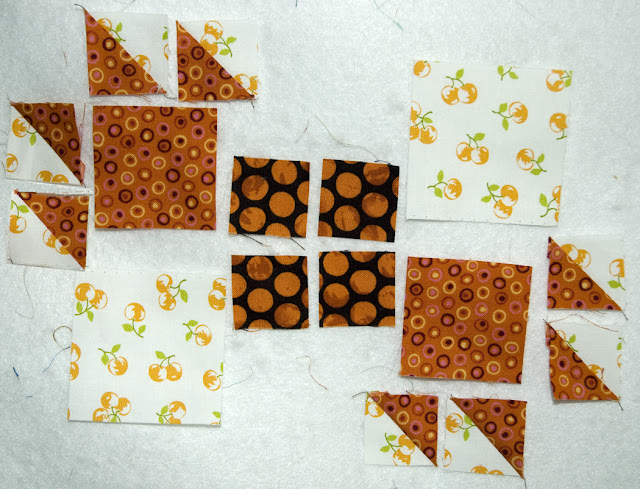 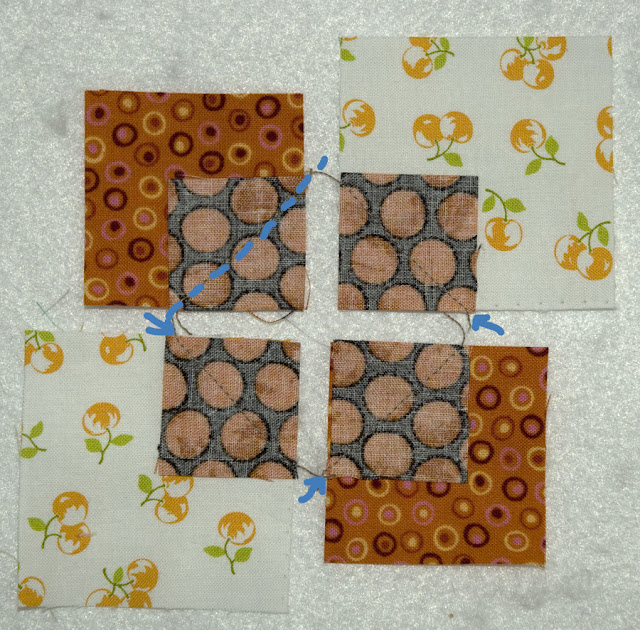 To make these, lay the flip squares face down on the base square and sew along the diagonal, staying to the outside of the center diagonal. And here's my strategy...I don't stress about how well I sew the diagonal, because I'm going to press the square over AS IF I had sewn it perfectly. (And yes, if my line is ridiculously atrocious, I do resew the diagonal...this time using the fold line as my guide...but it truly has to be way off). 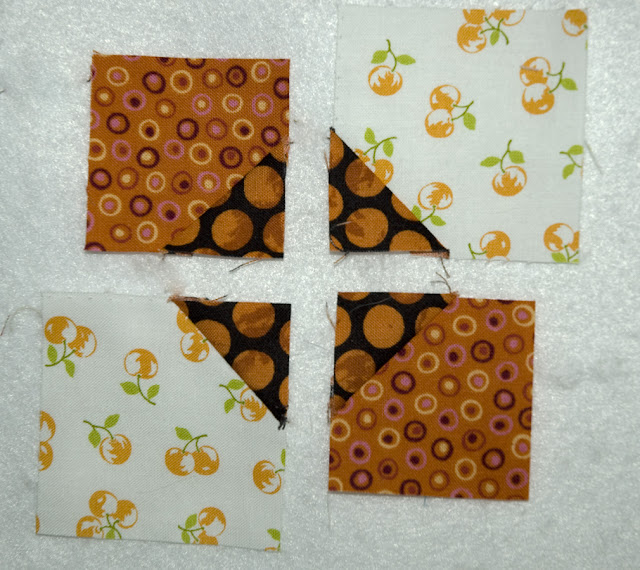 Here are the blocks after we've finished our four flips.

Next, sew the HST (half square triangles) in pairs as shown. You can also have the pieces laid out in front of you according to their position in the block if that helps you keep track of these pairs. 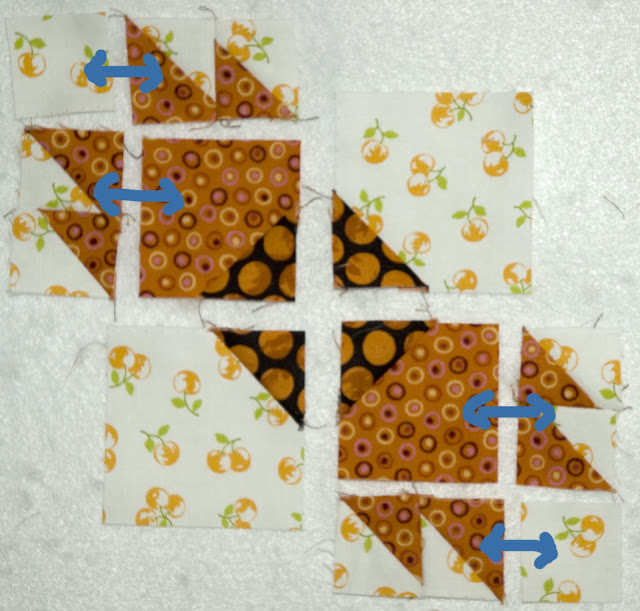 Next, sew the 1.25 inch background square to the top/bottom set of claws. And sew the side claws to the bear's palm. 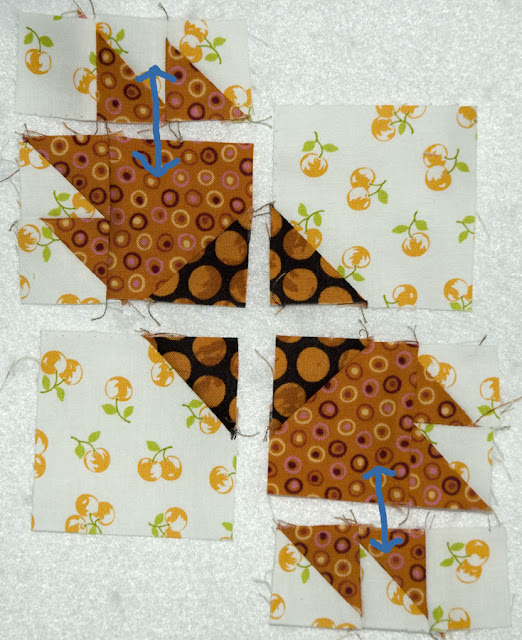 Now sew the top/bottom claws to the rest of the bear's paw. 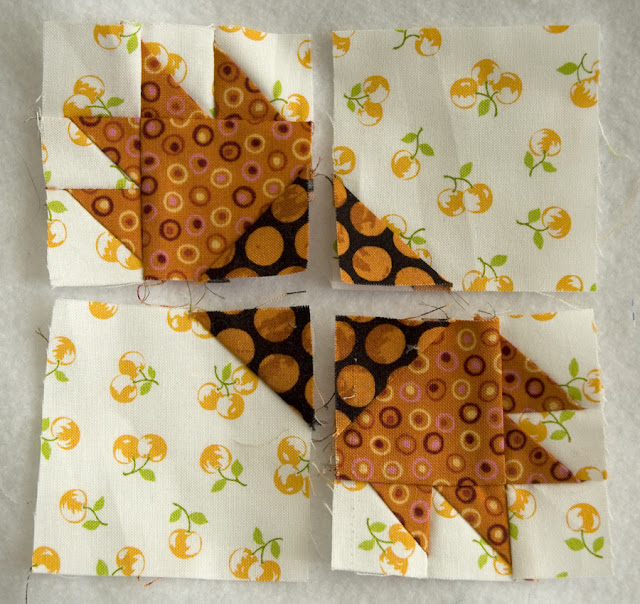 At this point you're going to join these four patches...and I assume you can make it home on your own from here... 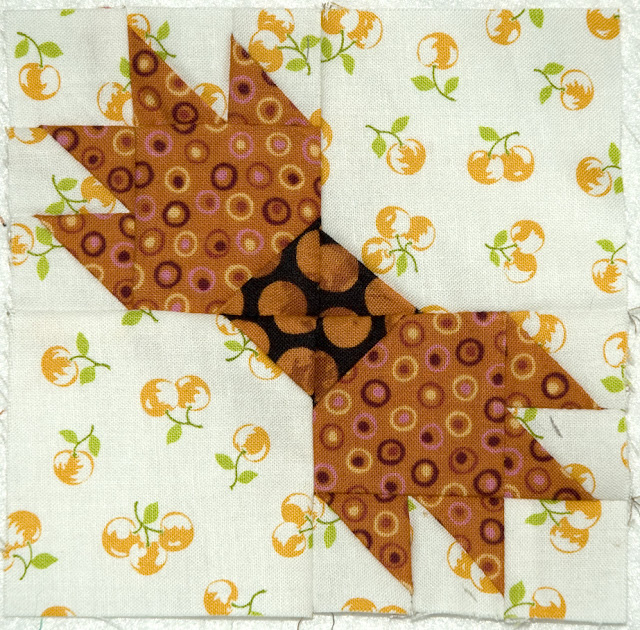 And yes, I chose a fabric for a background that looks like peaches (although they might be cherries)
because I happen to know first hand that bears like peaches. 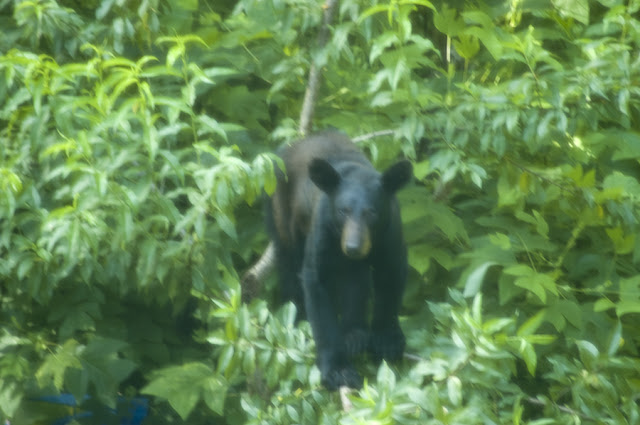 Here's a bear walking the center trunk of the peach tree down to the ground so the peaches are easy to reach. (The tree does not like this method.) 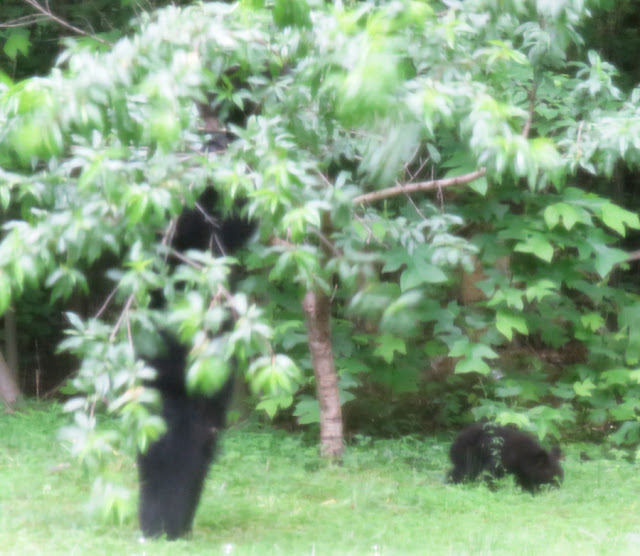 And in case you wondered...bears would eat the peaches quite early in the season well before they are ripe. Yes, they do spit out the peach stone. (The peach tree was in my front yard when I lived in Virginia).

On a historical note, I made up the bear's bow-tie block back in the ancient times of the early 1980s before I knew I would share my peach tree with black bears. Mary Ellen Hopkins put it in her book "It's Okay If You Sit On My Quilt." It's block 199, in the six patch section.
Posted by Sally Trude at 12:30 AM